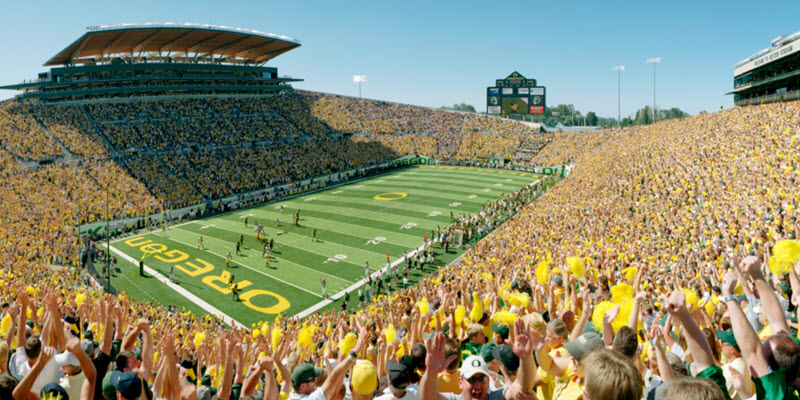 Located in the northwest of the U.S., in Eugene, Oregon is an outdoor football stadium named Autzen Stadium. To be more precise, it is located north of the University of Oregon campus and acts as the home field of the Oregon Ducks of the Pac-12 Conference. The arena was opened in 1967 and has undergone several expansions since its opening. The official capacity is currently at 54,000. However, attendance at the stadium regularly exceeds 54,000 attendees.

Prior to 1967, the Ducks only played three home games per year on campus in most years; with the exception of the Civil War game. The annual rivalry game with Oregon State, games that were likely to draw big crowds were played 110 miles north in Portland at the larger Multnomah Stadium rather than the Ducks’ Hayward Field. However, the Ducks became so popular that attendance outgrew the campus facility and they received popular support to play the entire home schedule in Eugene, Oregon. Thus, athletic director, Leo Harris, led a campaign to build a new stadium on 90 acres (0.36 km2) that the school had acquired for the purpose in the 1950s on his recommendation.

The stadium was built within an artificial landfill (over the refuse) to eliminate the need for multilevel ramps. As a result, construction took just nine months to complete and the cost was approximately $2.3 million. Out of the total cost, $250,000 was contributed by the Autzen Foundation, headed by Thomas E. Autzen, son of Portland lumberman and philanthropist Thomas J. Autzen (1888–1958), for whom the stadium was named after. Ironically, the elder Autzen was an alumnus of archrival Oregon State University. The foundation’s donation was linked to his son, a University of Oregon alumnus from the class of 1943.

In 1982, a $650,000 meeting room complex named the Donald Barker Stadium Club was opened on the east rim above the end zone. This complex gave the stadium its first meeting facilities and was dedicated at the home opener in September.

A proposal to enclose the stadium within a dome was given serious consideration in 1985. New tax laws on contributions changed the feasibility causing the overall project to scale back. Later on, in 1988, a $2.3 million renovation built a new press box on the south side of the stadium and converted the original north side press box to luxury suites.

In 1995, the field was named Rich Brooks Field in honor of the Ducks’ coach from 1977 to 1994. Coach Brooks led Oregon to its first outright Pac-10 championship and its first Rose Bowl appearance in 37 years. All of these were achieved in his last season. After the 1994 season, Coach Brooks left Oregon to become head coach of the St. Louis Rams of the National Football League.

In 2002, a $90 million facelift and expansion was done. It added seating and luxury boxes to the south sideline, bringing the stadium seating capacity up to its current level. Five years later, the large yellow “O” was added onto the south end of the stadium exterior when ESPN’s College GameDay crew was on location. That season, “GameDay” originated two of its Saturday shows from Eugene.

In 2008, a new, 33-by-85-foot (10 by 26 m) high-definition LED scoreboard and replay screen, known as DuckVision or “Duckvision 2.0”, was installed. It is currently the 39th largest video screen in the NCAA. Two years later, the field was replaced with new FieldTurf that featured the new Pac-12 logo. The installation was made even before the logo was officially revealed to the public. During the process, the crown was also removed to make the field flat and new paneling was added to the walls surrounding the field.

In 2014, the east end-zone scoreboard was updated to include a digital screen. The addition also included 150 flat screen monitors throughout the concessions areas, additional culinary options in the form of food trucks on the north side of the stadium, increased cell phone repeaters, and an upgrade to the sound system. Additionally, the sideline wall graphics were updated from the new panels installed in the 2010 season.

Ticket Policies:
Read up on the ticket guarantee and our chosen ticket marketplace on the Autzen Stadium tickets page.